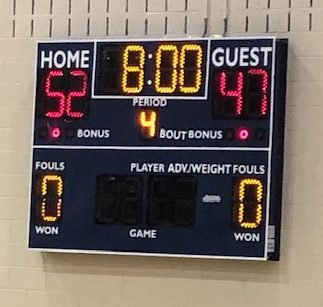 By Avi Cantor and Rahmir Powell

The Science Leadership Academy Boys Basketball team is starting to heat up coming out of the holiday break. Last Saturday, the Rockets defeated the Freire Charter School Wilmington, a team that sits in third place in their division. The Dragons sport four players at or above six feet, all of which played regularly against the understaffed Rockets, who due to injuries and other conflicts, were only were able to dress 6 players. Down by as much as 18 points in the fourth quarter, the Rockets rallied back with offensive explosions from juniors Rahmir Powell and Micah Jack who combined for 30 points, along with sophomore Jakob Cantor who dropped 11. The team’s defense was aided heavily by senior Hamidou Doumbia who swatted shots left and right. This 52-47 overtime win lit a spark inside of this young and resilient team, who rebounded from tough losses against Maritime and SLA Beeber.

Coming into the new year with momentum, the Rockets came from behind again on Wednesday against the Esperanza Charter High School Toros. Last year, the Toros tore through the Rockets defense scoring 51 points in a 19 point win. However, this year, the two teams slugged it out in a defensive battle until the fourth quarter. With six minutes left, Esperanza was up as many as eight points.

Cue: sophomore Cameron Simms Jr! The dual-sport guard put the team on his back, dropping 14 of his team’s 18 4th-quarter points.  Attacking the basket ferociously, Simms would put the game away with a contested layup and would finish the day with 17 points.  Although there is still a lot of work that needs to be done, the Rockets are ready to do the hard work of winning their division.